A short hike and I found crabs in the docks of the new forest??

Posted on June 7, 2016 by REcreate-RebeccaEvansCreate 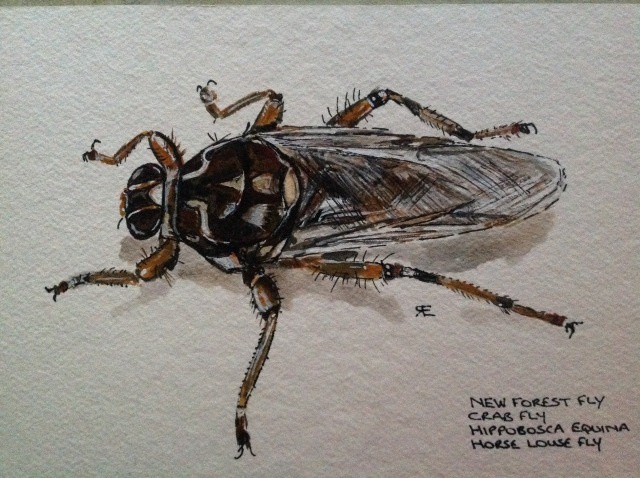 So for today’s #naturedoodlewash I really did not need to travel far. From my title you may think I went on a delightful ramble along the coast, but on this occasion I wasn’t near a single port /harbour or dock as you may have thought for finding crabs. Instead I was down the field doing my morning checks of the three boys, paddy, struggles and Woody.

Now the new forest is a wonderful place all year round, but it is also home to a beast of an insect,known as the crab fly and detested by horse keepers ( and other livestock) it is found more commonly in the hairless areas of the horse, between the legs and under the dock ( tail). It is not found worldwide, instead in a number of hotspots around the world, maybe we should be privaledged?? Ummmm NO sorry.

It is a real problem in the summer for some horses, and I have known a few to throw themselves onto the floor and roll to get them off….even if a rider is onboard, it is unusual, and usually if this occurs it is a horse purchased from out of the local area. Apart from the fact they bite the horses, they run sideways like a crab, with a claw grip, this sensation is horrid, I know! They are so difficult to catch, and when you do they have a hard shell, making it difficult to squash. As yet no fly spray really works, if someone ever develops one it would be worth a fortune in the new forest 😉

Hippobosca equina, also known as the forest fly or New Forest fly, is a biting fly from the family Hippoboscidae. They are blood-feeding ectoparasites of primarily horses and other large mammals including cattle.It is a permanently fully winged fly, not shedding its wings on finding its host, as in some other Hippoboscidae. With its wings retained, it may thus fly away from its host to deposit its larvae. They are good fliers

The primary distribution is in Europe and parts of Asia and Africa. It has been introduced to other locations, though in some cases latter eradicated by modern husbandry practices.In the United Kingdom they are known primarily from the New Forest and increasingly from South Devon. There are occasionally recorded from other part of the UK, though some reports as far north as the Scottish borders are considered dubious.In the United Kingdom, their flight period is from May to October, but peaking August and early September.

Their primary host are equines; they are often also frequently found on cattle on which they are able to maintain a population. They have been known to bite a number of other mammals, including sheep and goats. Though it is actively attracted to humans and will land, it does not often bite them. Other mammals it may also live on are red deer, camel and rabbit. Also on birds: the grey heron, and the northern goshawk.

My name is Rebecca Evans, living in the New Forest I have been inspired to paint the many animals often seen around me. Having ridden since Childhood, painting equines was a natural path to follow. I use a variety of media, watercolour, oil, charcoal, pastel,inks, plus a few more, infact I will try most things. Choosing the medium to work with can really change the effect of the art, and therefore the character of the animal. Sometimes it is an instant decision, sometimes it is the mood from within me which determines which medium I choose to use. I never know what might inspire me next, but if it’s hairy, I will be sure to try.
View all posts by REcreate-RebeccaEvansCreate →
This entry was posted in art and tagged art, crabfly, equine, Horse, naturedoodlewash, new forest fly, painting, Safari pen, watercolour. Bookmark the permalink.

19 Responses to A short hike and I found crabs in the docks of the new forest??