Winter is on its way, pony power!

Posted on November 11, 2015 by REcreate-RebeccaEvansCreate

Winter is now creeping up, I have clipped two out of three ponies ( rain put in an appearance so I have to put off clipping struggles until next week). The ponies are back in their stables each night, the mud has shown its ugly face in the fields ( or more often than not on the ponies) ……it’s all rugs and mucking out for the next four months, dark wet and cold mornings, all for the love of three four legged boys. On the plus you can’t get better than crisp frosty morning rides. And finishing the day knowing they are tucked up in their rugs out of the wind and rain ( especially as paddy is rising 26 years, and struggles is clip clopping closely behind, woody is the youngster at a mere 7 years). 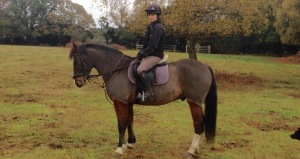 My name is Rebecca Evans, living in the New Forest I have been inspired to paint the many animals often seen around me. Having ridden since Childhood, painting equines was a natural path to follow. I use a variety of media, watercolour, oil, charcoal, pastel,inks, plus a few more, infact I will try most things. Choosing the medium to work with can really change the effect of the art, and therefore the character of the animal. Sometimes it is an instant decision, sometimes it is the mood from within me which determines which medium I choose to use. I never know what might inspire me next, but if it’s hairy, I will be sure to try.
View all posts by REcreate-RebeccaEvansCreate →
This entry was posted in clipping, Horse, new forest, pony, winter and tagged clipping, Horse, new forest, pony, winter. Bookmark the permalink.

2 Responses to Winter is on its way, pony power!